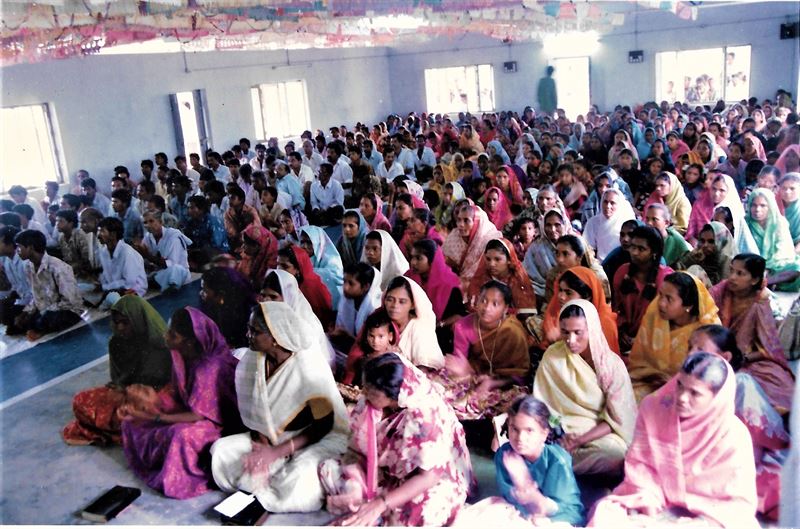 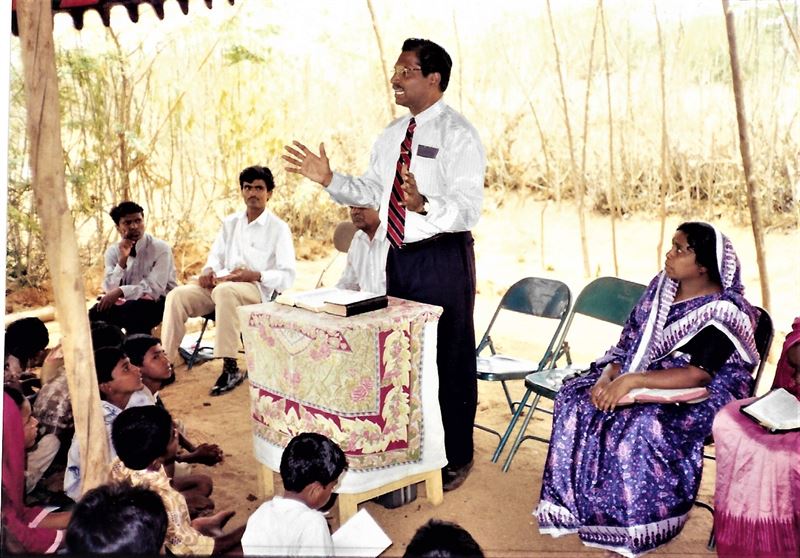 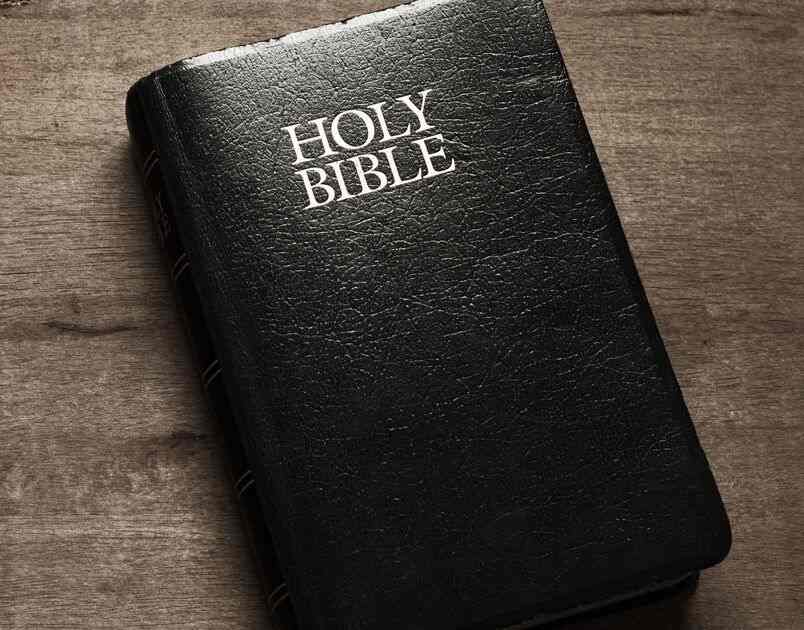 “Surely He hath borne our griefs, and carried our sorrows: yet we did esteem Him stricken, smitten of God, and afflicted. But He was wounded for our transgressions, he was bruised for our iniquities: the chastisement of our peace was upon Him; and with His stripes, we are healed.” - Isa 53:4-5

Rev. Dr. Victor Solomon Isaac was born and brought in a nominal Christian family. He lost both his parents at a very tender age of four and was raised by his older brother. Although he was attending the routine church services, he was not acquainted with the word of God. As a young man he was involved in athletics, debates, and dramatics and on one occasion he approached the Director of the Film Industry to enact in the upcoming movies. All of a sudden a strong desire sprout in him and hence decided to adopt the ways of a conjurer who was skilled in magic and witchcraft invoking supernatural powers to influence events. The absence of the presence of the Triune God in his life made him to adopt the ways of the world. One of the Sabbath morning he happened to hear a young man speak of surrendering our lives to God, and this brought about an envy in him as to how could Christians be asked to surrender their lives. The arguments finally resulted in atheism. At home, there was a deep anguish in him. He, who was emotionally disturbed, began to realize what made him to deny Christ. As per the traditional worship, he was habituated to recite the Lord's Prayer before he retires to bed and as the day begin; he would glance at the portrait of Jesus on the wall. The very night of him being disturbed, he began to recite the Lord's Prayer and at the closure, he uttered just a word, “I surrender,” with deeper frustration and anguish. The next morning as he approached the portrait of Jesus Christ a sudden burst of an enormous light emerged out of the wall, which was beside the portrait. As Moses was drawn to Jehovah God by witnessing the burning bush so was Rev. Dr. Victor witnessing the mighty move of God. It was the appropriate hour that God had opened his inner heart and he knelt in the presence of the Lord, expressing his forgiveness for his action with total surrender and humility due to the mighty intervention of God the Holy Spirit. The mighty hand of God brought about revival in him with a great anointing and ability to speak in tongues.


In the year 1965 he was asked courteously to share his testimony in a village ministry on the day of our independence (15th August, 1965), people were touched and spontaneously accepted Christ as their personal Savior, there was a tremendous transformation of lives within a fraction of a second. The spirit of God brought about revival confirmed by signs and wonders. Being a graduate of Sathi Homoeo Medical College, he was practicing the Homoeo and Bio-Chemic System of Medicine. He had developed a tumor on his right palm. This system of medicine failed to bring positivism in him. All that he could do was only pray in staunch faith for a miracle to take place in him; within a couple of days without his knowledge, the tumor on his right palm vanished. Praise the Lord! The Lord commanded him to stop exercising the profession of Homoeo and Bio-Chemic System of Medicine. In the very year, he was rushed to a Hindu hospital as he was suffering with intense pain in the chief digestive organ. Appendectomy (surgical removal of any appendage) had to be done on the spot, as the appendage was 10 inches long. There was hardly a penny to carry out the surgery. The surgeons' reviewing the deplorable condition of the family with six children in pathetic state shed tears. The Lord laid a burden in their hearts' and the surgery was performed with the help of our Lord Jesus Christ. After a couple of days the wounds being infected were cut open even without the use of local anesthesia, instruments were thrust into the wounds to refrain excessive flow of blood and pus formation. This caused a dreadful intolerable pain .It was at this appointed time that the Lord opened his inner eyes to see Christ's sufferings on the cross. Though he was rigorously suffering with pain and agony, he made use of the God given opportunity to share the message of salvation, remission of sin and redemption to those who were hospitalized and to those lying in their deathbeds. In the midst of obscurity, he brought up his six children in a little home. Fervent prayers were conducted at home; people would flock in and thereby accumulate the entire area. The mute spirits, the deaf spirits, the witchcraft spirits, the suicidal spirits, and every kind of familiar spirits were cast out and people from different backgrounds who were enthralled by the powers and rulers of darkness were delivered. The witch doctors fled with fear. The property owner was enraged and hence constantly tormented the family by abusing them as and when the prayers were being conducted. On the plea of renovation, the whole lot of dust would defile the little amount of food, which would be the inadequate meal of the family.


In the year 1980, the Lord commissioned him to carry the resurrected power of Jesus to the tribal folk in the belts of Ooty, India, where the gospel of Jesus Christ has never been heard in their lifetime. People were set free from their bondages, the sick were healed, and evil spirits were cast out and the greatest gift of salvation was experienced with the strong anointing of the word of God. At the same juncture, Rev. Dr.Victor received a prophetic word from the Almighty God saying “I will take you across the seas and I will make your Ministry an International Ministry.”He had to undergo financial perplexities and was not able to afford even for a passport form. Under the guidance of the Holy Spirit he received an invitation from an unknown source and exactly in the year 1983 with the prophetic word coming alive, he traveled abroad carrying the gospel of Jesus Christ. With the dynamic ministry that God has ascribed him, thousands of people were instantaneously touched and set free from the clutches of the devourer.


In the year 1986 while Rev. Dr. Victor was in deep contemplation with the Lord, a golden flash of English letters “HEALING STRIPES '' burst into view in a vision. God the Holy Spirit directed him to carry on the faith ministries of “Healing Stripes'' to reach humanity with the message of hope. Through this ministry, thousands of people have come to salvation of our Lord Jesus Christ. Healing Stripes Magazine was registered with the Registrar of Newspapers in India, New Delhi in the year 1986.When the method of printing operation with regard to the first issue of Healing Stripes Magazine was going on, Rev. Dr. Victor saw a vision right in the printing press; it was the sight of an evil ridiculing him. Soon the Lord directed him to rush home, he saw his home burning and things turning out to be a stack of ruins. Praise be to the name of our Lord and Savior Jesus Christ who within a span of years transformed Healing Stripes Ministries and made it possible to be an Interdenominational Independent International Faith Ministry.


“Many are the afflictions of the righteous: but the Lord delivereth him out of them all”- Ps 34:19 “But watch thou in all things, endure afflictions, do the work of an evangelist, make full proof of thy ministry”-2 Tim 4:5

All glory and honor belongs to our Lord Jesus Christ. Amen!